With its luxury reception rooms overlooking Place de la Concorde, next to the Tuileries Garden, the Hôtel de la Marine, the headquarters of the navy and colonies ministry, was a prime venue for holding grand balls in the 19th century. These lavish, elegant events were organised to showcase France’s splendour.

But how could you enjoy a ball at the Hôtel de la Marine without making a faux pas? Follow this guide.

How the ball would unfold

It was usually at around 8pm that carriages would drop off the first guests in the court of honour of the Hôtel de la Marine. They would take the grand staircase to go into the first-floor reception room. There they would leave their coats with their footmen, who would spend their evening waiting for them in the antechambers.

The guests would then enter the salons of honour where a servant would announce their arrivals by their respective names and titles. Both the men and women would then head towards the different reception rooms while waiting for the ball to begin. To pass the time, they could enjoy games tables at their disposal. Because balls at the Hôtel de la Marine would host several thousands of guests, time was needed to welcome all the guests.

The ball was held in the grand reception room, where guests could dance or watch guests dancing from the comfort of bench seats and armchairs. A buffet would be served to feed the guests and servants would shuttle around the reception rooms, offering refreshments. Champagne, which was highly sought-after at the time, was the premier drink at these high-society events.

Lastly, late at night, a supper would be served to end the party. Meals would be served in separate dining rooms. Guests would dine there seated at tables, enjoying a true meal made up of dishes served in succession. At the end of the meal, the servants would set the table again for a second sitting.

During the period of the Second French Empire, the Empress Eugénie, who loved balls, would get up from her chair at around midnight, give a grand curtsy and leave the party. This signalled the end of such soirées, which would often finish at around 1am.

At the end of the 19th century, during the Belle Époque, the trend changes. The soirées would start with the dinner, often with fewer guests. Soup, fish, poultry supremes, turkey poults, salads, artichoke hearts, fruits and ice creams would be served during the meal, accompanied with the finest wines. The ball itself would only begin at around 10pm, when most guests were invited to dance.

At the start of the 19th century, people mainly danced quadrilles. This dance was highly codified with four couples of dancers performing predefined figures.

Dancers who were semi-professional would open the ball. These dancers were specially chosen to perform complex dances with arabesques, jumps and leg movements. They were then joined on the dance floor by less experienced dancers who would perform simpler figures.

Towards the end of the 19th century, the waltz emerged, as did many ballroom dances like polkas, mazurkas and galops. These were different to ballet dances like the quadrille as they were practised in couples.

Over the course of the 19th century, fashion changed considerably. Under the French Empire, women wore muslin or white silk dresses, high-waisted with wide square necklines. Hairstyles were tied in buns. They would keep warm with cashmere shawls, or even fur swan necks. 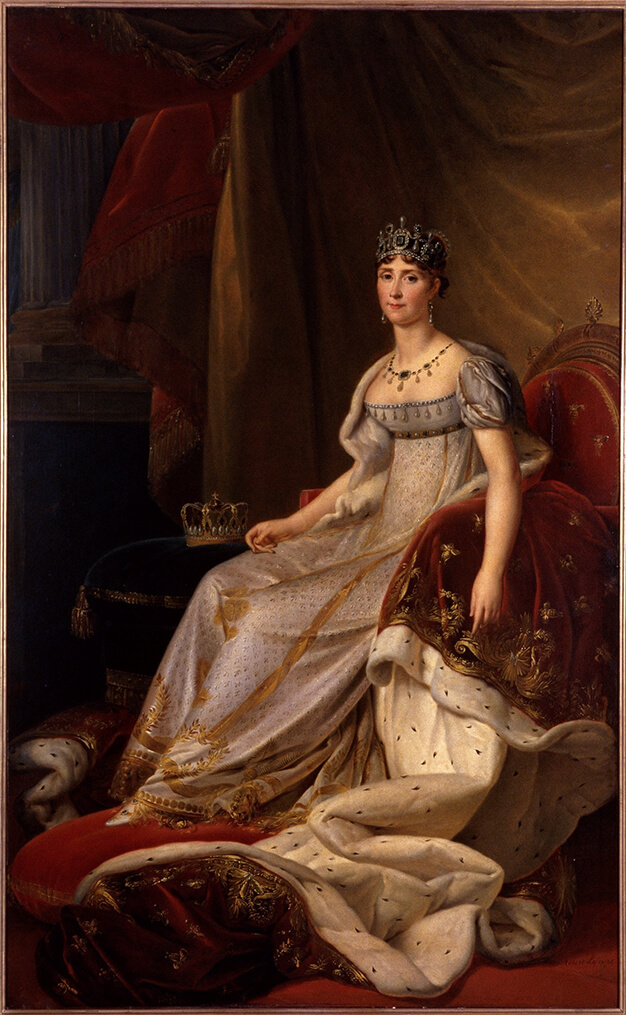 Under the Bourbon Restoration, the corset made a comeback. Dresses flared out with crinolines, undergarments that supported the weight of petticoats, and sleeves puffed out. Hats and hairstyles became extravagant and feathered. Many diamonds, pearls, knots and ribbons were attached to dresses and to hair styled elaborately. With the many mirrors of the salons of honour in the Hôtel de la Marine, balls were dazzling.

Lastly, the essential accessory at the time was a Chinese paper fan! Ladies of high society were mad about Chinese items that were highly fashionable at the time.

Female outfit at the end of the 19th century

During the French Second Empire, masquerade balls became very popular. Guests would wear masks. Men would dress in an Italian style and women’s dresses would evoke characters from the commedia dell'arte. Multicoloured patterns and wide ranges of hues contrasted with the sobriety of evening dresses of classic balls.

Special attention was given to decoration at balls in the Hôtel de la Marine. Staff installed plenty of flowers, which would be placed in vases or weaved into garlands attached to the walls and ceilings. The reception rooms were lit up with thousands of candles.

The grand mirrors in the salons of honour reflected the golden decor of the walls, the dancing flames of the candles and the countless flowers.

From the 1890s, the Hôtel de la Marine was lit up by electricity, which, at the time, was a recent innovation and the height of luxury.

Today, the salons of honour of the Hôtel de la Marine still plunge visitors into the splendour of grand 19th-century receptions through explanatory devices. You can still hear the music playing and see couples in dress from the time dancing the waltz. To experience it all for yourself, you just have to come and visit the monument!