At the time of the Garde-Meuble de la Couronne, it was fashionable to have a Louis XV chest of drawers at home. Why?

Jean-Henri Riesener, the king’s cabinetmaker from 1774, was the reference specialist in making these items of furniture that all 18th-century noblemen were keen to have. His work is a full expression of the era’s refinement and opulence. His furniture could be found in the most beautiful rooms of the Palace of Versailles and in the Garde-Meuble de la Couronne, the future Hôtel de la Marine in Paris.

Jean-Henri Riesener was doubtless the most famous cabinetmaker in the 18th century.

Originally from Germany, Riesener trained as a cabinetmaker in Paris in the workshop of Jean-François Oeben, a cabinetmaker for Louis XV who was supported by the Marquise de Pompadour and renowned for his furniture featuring mechanisms. These items of furniture included ingenious systems by which they could open and turn, for example. In 1767, Riesener was awarded the title of ‘master cabinetmaker’.

What characterised his style?

Out of financial concern, Marc-Antoine Thierry de Ville d'Avray, put an end to the partnership between the Garde-Meuble de la Couronne and Jean-Henri Riesener, his creations being considered too expensive.

This highly meticulous decorative technique reached its heyday in the 17th and 18th centuries. It was chiefly carried out by cabinetmakers, who gained a great reputation. Among the most famous marquetry specialists was André-Charles Boulle, a cabinetmaker for Louis XIV, who helped promote French decorative arts in the 17th century.

This chest of drawers was originally located in the apartments of Madame Lemoine de Crécy, the wife of the chief warden of the Garde-Meuble de la Couronne from 1784. Records of it can be found in a furniture inventory from 1788. 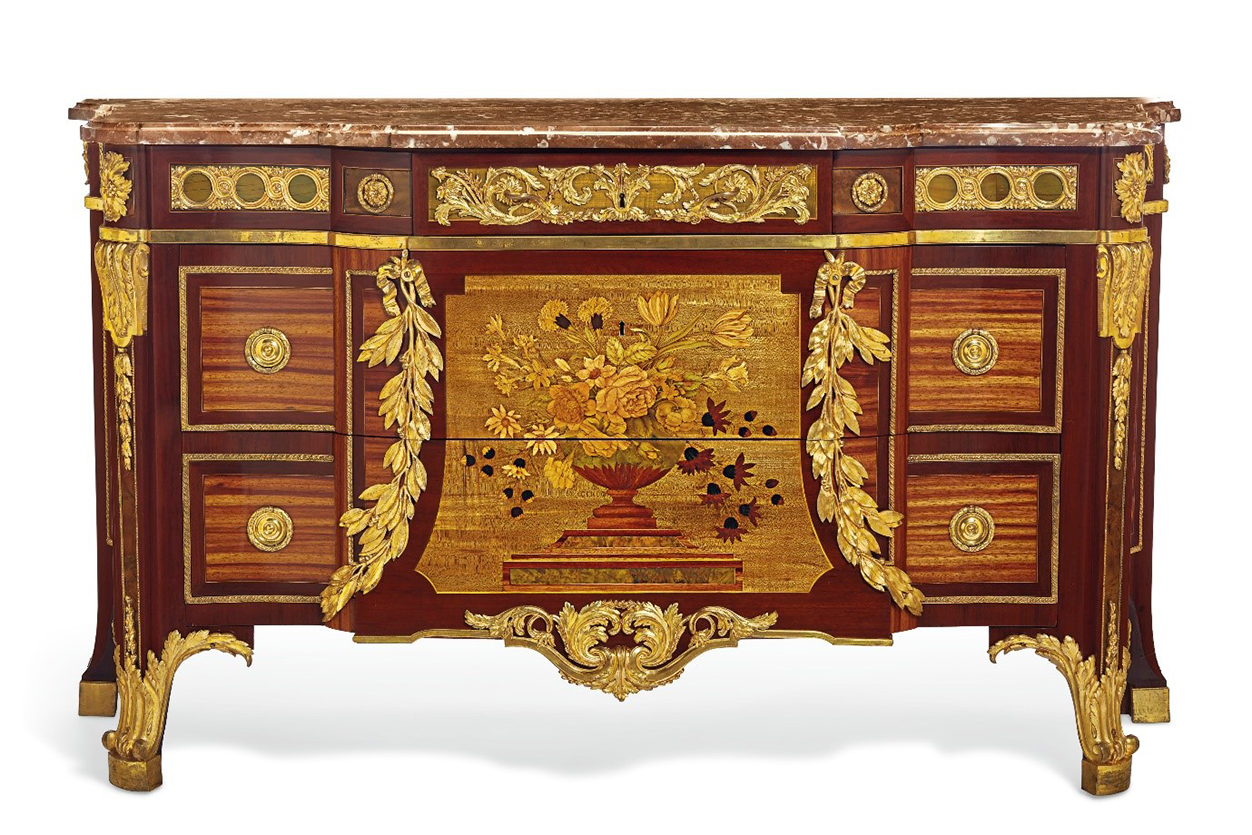 The Jean-Henri Riesener chest of drawers, made for the apartments of the second Intendant’s wife

This chest of drawers represents the Riesener style perfectly:

The decor of the facade hides the structure of the item of furniture well. Can you spot all the drawers and count them?

The golden features are made from bronze chiselled very finely. In the centre of the chest of drawers is a work of marquetry crafted with great delicacy. It represents a vase, on a pedestal, filled with different varieties of flowers in trompe l'œil style. They are formed by different kinds of wood, which bring out the volumes and colours. This work of art is surrounded by two laurel wreathes in golden bronze, attached with ribbon knots. These decorative aspects are typical of the Louis XVI style. Indeed, Riesener was one of the craftsmen behind the shift from the Louis XV style to the Louis XVI style.

Today, very few items of Riesener furniture remain in private or public collections on public display. Visiting the Hôtel de la Marine gives you the privilege of seeing this item of furniture standing in its original decor: the bedroom of Pierre-Elisabeth de Fontanieu!

This chest of drawers is a gift from the Al Thani Collection Foundation to the Centre des monuments nationaux.