How do you restore a building that has had several lives, like the Hôtel de la Marine? Let us take you behind the scenes of an outstanding project that was carried out on Place de la Concorde, in the heart of Paris, from 2017 to 2020.

In 2015, France’s navy ministry left the Hôtel de la Marine to join the new site of France’s ministry of defence in the south of Paris. The monument was then handed over to the Centre des monuments nationaux. The aim was to restore the edifice and give visitors an experience of the Garde-Meuble de la Couronne as it was during the era when the building was built in the 18th century.

A clear aim: to restore the 18th-century atmosphere

After more than 200 years of France’s navy ministry occupying the Hôtel de la Marine, the building’s internal organisation and decor had changed greatly.
The Centre des monuments nationaux, which was put in charge of managing the monument and its opening to the public, chose to restore the original decor: that of the Garde-Meuble de la Couronne in the 18th century, an outstanding token of excellence in French architecture and decor.

It was indeed about restoring, as it involved returning the monument to its original state, that of the time when the edifices were built in the 18th century. The CMN and teams of conservators and restorers were pleasantly surprised to discover original wall decor, ceilings and floors beneath the successive additions from the 19th and 20th centuries.
This has also offered a tremendous opportunity for visitors, who can now admire the unique, outstanding atmosphere of an apartment from the century of Enlightenment. The stately reception rooms that run along the loggia have been kept in the decor that the navy ministry sought in the middle of the 19th century. 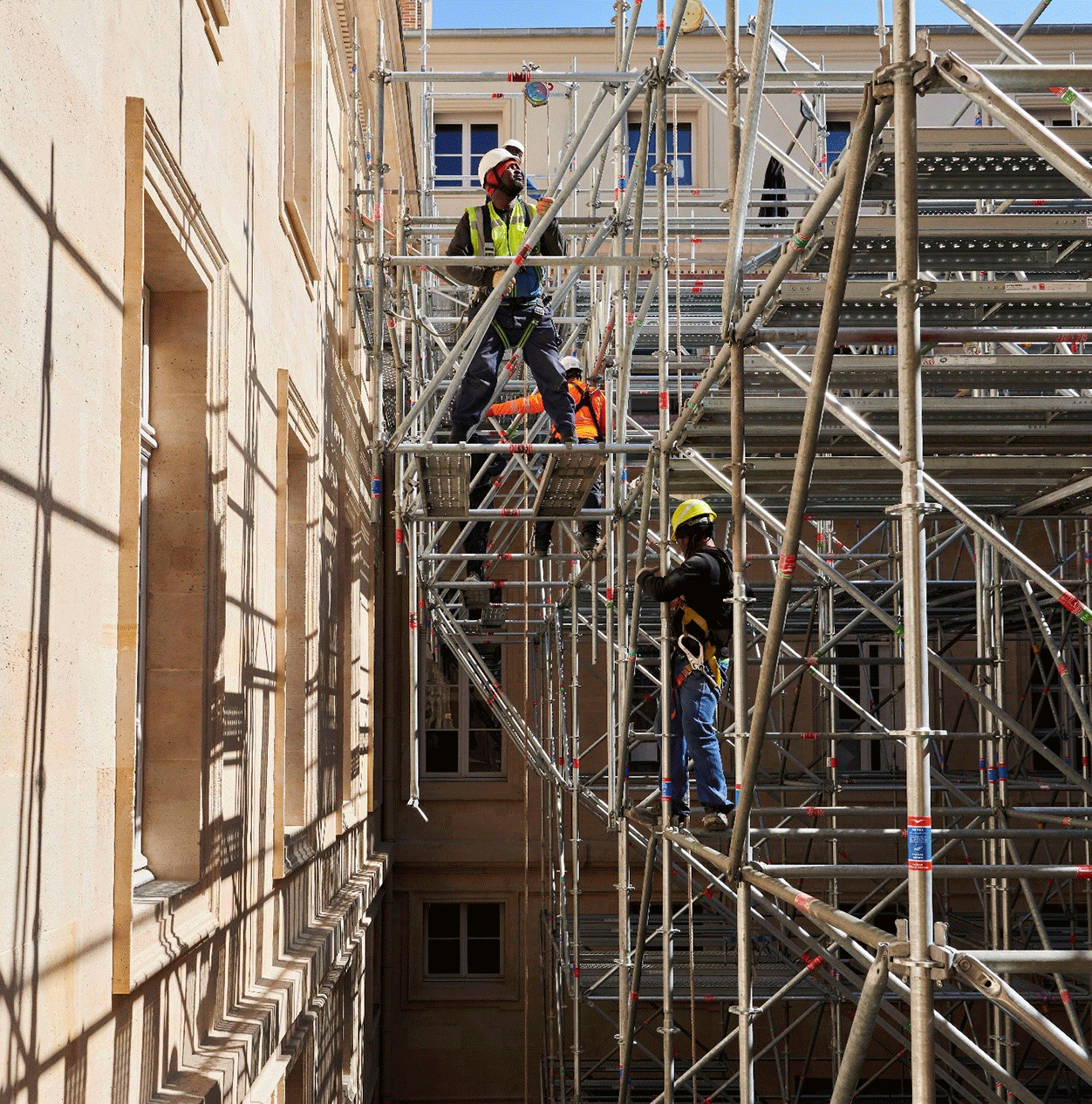 Scaffolding standing in the Intendant’s court, one of the inner courts of the Hôtel de la Marine. © Benjamin Gavaudo

The opening of the Hôtel de la Marine to the public prompted the Centre des monuments nationaux and its conservators to combine restoration and repair of the building. But what exactly is the difference between restoring and repairing?

● Restoring: This involves returning an object to its original state by removing traces of later alterations it may have undergone.

● Repairing: This involves putting a work or monument back into good condition by respecting its current condition and style as much as possible.

At the Hôtel de la Marine, the decision was made to restore the Intendant’s apartments back to how they were at the end of the 18th century by removing traces of the navy ministry’s time there.
This process was helped by the discovery of original paintings beneath the layers of more recent paintings, restoration of these, and use of materials and techniques from the time.

The first phase of works involved giving back the building its original dimensions.

Over the course of two centuries, the navy’s spatial needs changed: more offices were made, lifts were installed and new technology like electricity, telephoning and the internet arrived. To gain space, some rooms were given mezzanines: an intermediate floor would be added to double the floor surface.
On the first floor, the old gallery of bronze works overlooking the inner court had also been closed up and given an extra floor to gain space.

The first phase of the project therefore helped remove these additions to reveal the building’s original state, both inside and outside.

Works on the Hôtel de la Marine were not just about return to the building’s origins.
The contracting authority wanted a touch of modernity by capping the Intendant’s court with a glass roof and giving the court of honour an illuminated walkway.

The building therefore offers a fruitful dialogue between the 18th and 21st centuries.

Rediscovering the painted decor of the Intendant’s apartments

How do you bring back decor dating from several centuries ago?
Simply by scratching. Indeed, preliminary studies and surveys, carried out before the restoration works began, quickly helped discover, beneath the layers of paintings and decor added over the years, the original paintings of the Intendant’s apartments.

Equipped with scalpels, the teams of restorers were therefore tasked with stripping, peeling, erasing and rubbing – square centimetre by square centimetre – the more recent paintings to reveal the flamboyant decor of the 18th century. 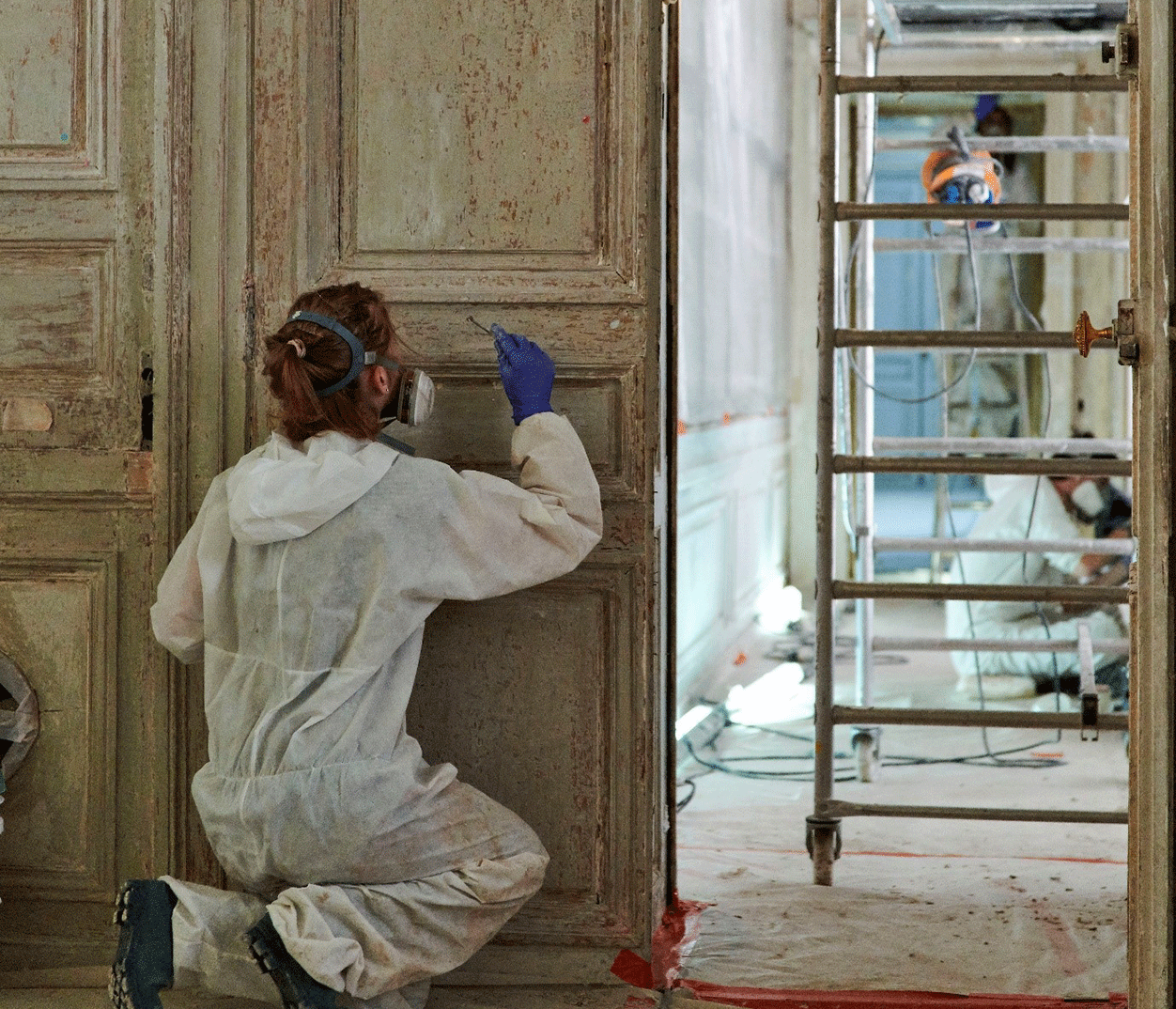 A restorer clearing layers of paintings added since the 18th century. © Benjamin Gavaudo

Special attention given to the furniture and fabrics

Thanks to the furniture inventories of the Garde-Meuble de la Couronne, it was possible to identify most items of furniture and fabrics in the Hôtel de la Marine in the 18th century.

Marc-Antoine Thierry de Ville-d’Avray, Intendant of the Garde-Meuble de la Couronne, drew up a general inventory of the institution’s collections in 1774, which is still considered a reference today.

What could be better than furniture for bringing back the place’s atmosphere of yesteryear? The Centre des monuments nationaux recently acquired two unique items of furniture from the cabinetmaker Jean-Henri Riesener: a chest of drawers and a wardrobe writing desk.
The former is representative of the style characteristic of the king’s cabinetmaker, while the latter, listed as a national treasure, came from an order placed by the Intendant Pierre-Elisabeth de Fontanieu to furnish his private apartments.

The decor restoration sought by the Centre des monuments nationaux and its experts also highlights the curtains, furnishing fabrics and wallpaper to bring back the original atmosphere of the Intendant’s apartments and the reception rooms. 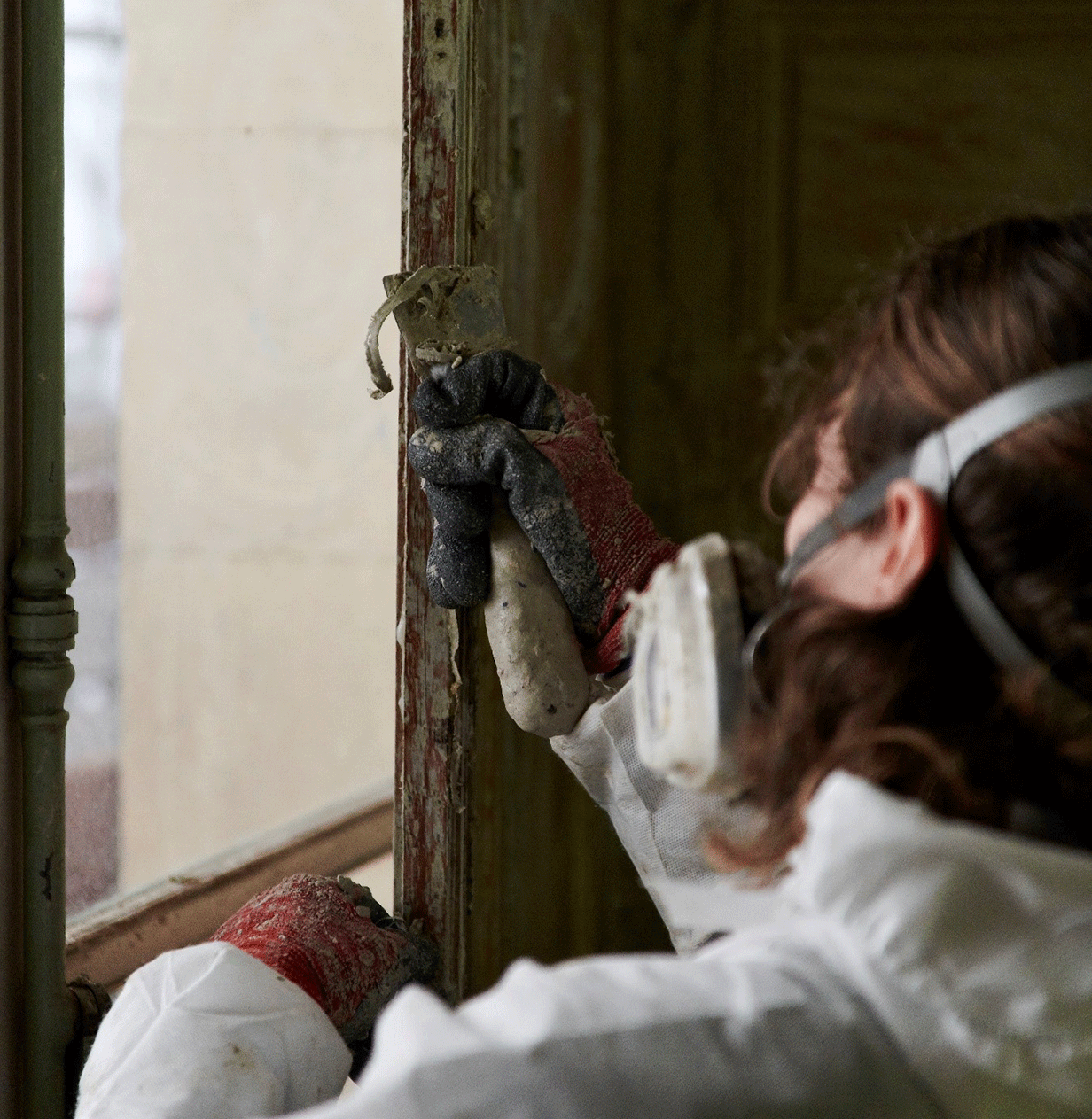 To achieve this, fabrics from the time were purchased from dealers or public sales: crimson damasks, brocades and more. These fabrics helped restore the furniture, especially the chairs.
The restorers also found enough crimson damask to entirely refit the golden room of Pierre-Elisabeth de Fontanieu.

Two rooms, the bedroom of Thierry de Ville d’Avray and that of his wife, were entirely fitted with fabrics. Unfortunately, it was not possible to find enough fabric to entirely reproduce the upholstery with fabric from the time.
The Centre des monuments nationaux made many attempts to get a fabric with a finish as close as possible to that of the original fabric.
The door curtains of the bedroom of Thierry de Ville d’Avray, currently kept at the Boston Museum of Fine Arts, are an important reference for this work.

The project in figures

● 330m² of glass roofing made to cover the inner court

Restorers carrying out surveys by removing layers of paintings one by one and discovering the original painted decor. © Benjamin Gavaudo

A message from Delphine Christophe

A message from Delphine Christophe, director of monument conservation and collections at the Centre des monument nationaux and head of the Hôtel de la Marine restoration project: 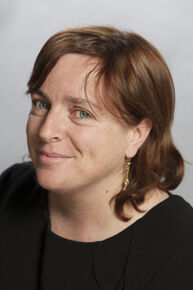 Up to now, the Hôtel de la Marine has barely been open to the public beyond European Heritage Days, so visitors are going to completely rediscover the building, especially the Intendant’s apartments.

This project has been outstanding because of the firm aim we set in restoring these apartments – to reveal the original paintings – and because of the work carried out on old fabrics and the high concentration of 18th-century furniture.

Throughout the project, we have stated our intention to make this palace an inhabited building: it is not a museum but a monument. Our aim is to truly show visitors what 18th-century life was like in apartments promoting excellence in 18th-century decorative arts.

These spaces are also highly unusual and unique. To furnish their apartments, the two Intendants of the Garde-Meuble de la Couronne helped themselves greatly to the royal collections, which they were in charge of. The place is neither the king’s residence nor the backdrop of the era’s leading noblemen.

We wanted to show that this building was, above all, a place for living and hosting. That is what prompted us to use portable devices with in-built explanations – a connected headset for an immersive audio experience – and to avoid all fixed explanatory features in these spaces.’

Come and dive into the 18th century at the Hôtel de la Marine!